So I bought OMGYES and here’s my review of it.

OMGYES.com intro from FGS on Vimeo.

Basically, OMGYES is aimed at closing the orgasm gap.

According to the National Survey of Sexual Health and Behavior (NSSHB), the last time they had sexytimes, 91% of men surveyed had an orgasm but only 64% of women did.

The idea is stupid-simple. Ask a bunch of women what feels good to them, find the patterns, then teach other women how to do those moves.

Co-founders Lydia Daniller and Rob Perkins had a research team interview 1,000 women about how they like to be touched and then commissioned Kinsey Institute researcher Dr. Debby Herbenick and Dr. Brian Dodge at Indiana University to conduct a nationally representative survey of another 1,000 women. This qualitative and quantitative research forms the basis of their recommended techniques.

It’s like you’re handed a map when you are born and told there’s treasure somewhere but you have to find it. OMGYES has colored in the paths that most other women have successfully used to find the treasure. Learning where the paths that tend to work are located just seems like such an obvious win.

Why did I buy OMGYES?

Not knowing is frustrating and trying new things is frustrating so I have my method that involves pressing myself onto the bed and I rarely deviate from that. I love sex. And I think it’s normal for the thing that gets you off to be mostly mental. But I wish it weren’t so difficult for me and my partners to get me off with our hands and their mouths. I suspect that if I knew what was mostly likely to feel good and wasted less time on stimulation that doesn’t, playing around with my vagina would be more fun and less frustrating.

It’s got a very easy and intuitive checkout process.

The interface is modern and attractive. Although I would have preferred it be more clear where I am supposed to start.

Once you click on a video, there are helpful hints about how to use the page and what is what.

I’m not exactly completely unread about sexuality, so I didn’t expect to learn a ton. For example, I’d heard of the “edging” technique to create stronger orgasms. But I found I learned things that not only did I not know about women’s orgasms, but things I found totally unintuitive, such as the specific fact that edging led to longer, more intense orgasms for 65.5% of women studied. More generally, I had no ideally that there are three main edging techniques, and for most women just one of them does the trick. 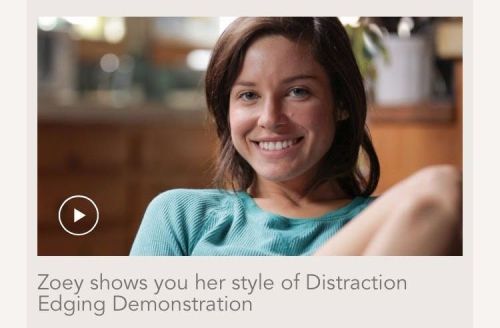 One thing that’s cool about the videos is the little things that you realize are normal. Like, I find that touching myself the way that I loved one time will do nothing for me the next, which is hella frustrating but also made me feel weird. But hearing Amber talk about sometimes having to find the sensitive spot on her vulva because it moves made me feel normal and like, “We’re in this together!”

So I took some of what I learned in the “teasing” module and tried it out IRL. That consisted of getting high and watching the Mindy Project, and then pausing when Dr. Jody Kimball-Kinney appeared on screen in a thin white tee. (Don’t judge me.) After teasing myself to orgasm, my lovely partner offered to help me try out some techniques.

It was awesome. It’s not so much that trying the technique is breaking new ground. It isn’t. It’s that I felt confident in directing him to use the technique. I was confident that it would work (2,000 women!) and confident that it was a normal thing to ask for. And, perhaps most importantly, confident to insist that it go on long enough to really work. According to OMGYES, teasing usually doesn’t work until you’ve done it a bunch of times. Truth be told, I wish there had been more teasing before the awesome sex we ended up having. And I felt confident enough to tell my partner that later that night.

This is kind of a breakthrough for me. I often get bored and anxious during the part of foreplay that’s focused on my pleasure, and end up cutting it early and switching to giving a blow job or something else I know my partner likes in order to keep things moving and keep my mind engaged. This is a mistake. It teaches my partners that I don’t want much head/touching/etc. when the truth is that I do want it. In fact I really need it. Just not like that. And it robs us of the opportunity to work together to find out what gets me out of my head and turned on.

If you also find yourself bored and anxious during foreplay, this is a good investment. It’s really nice to hear other women say, in essence, “Immediate, rough, dry fingerbanging isn’t foreplay.” And, “Going straight for the most sensitive area of my body and pressing hard on it after 2 minutes of kissing not only does not arouse me but actually feels horrible.” And, “Do not think that you are good at sex if you can’t move your tongue and/or mouth in the exact same way for five minutes straight.”

I had a pretty good grip on what didn’t feel good before OMGYES. But I didn’t know what to insist on trying, and what to insist on continuing. Most partners, if they tease me, do it for about 30 seconds before trying to put some part of their body inside mine. That’s not enough, not only for me, but for most women, according to the research. Maybe it shouldn’t, but it really helps me demand more to have other women backing me up, saying that the fact that it’s not working is because you need to do it longer. Which is somewhat counterintuitive.

I’d say, based on my experience, that every single man who has sex with women should buy OMGYES. Like, now. Y’all are not teasing enough, not consistent enough, not any of these things enough. None of you are.

I’d be curious about other women’s thoughts on why they would, or wouldn’t, be open to trying OMGYES. Let me know in the comments.