A father and son, ranchers from Burns, Oregon, are scheduled to report to federal prison on Monday to serve more prison time on top of the time they already served.

Now land-rights activists have seized the headquarters of the Malheur National Wildlife Refuge in order to take a stand against the unjust additional imprisonment of Dwight and Steven. They are also protesting how much land the federal government owns.

How much land does the federal government own? 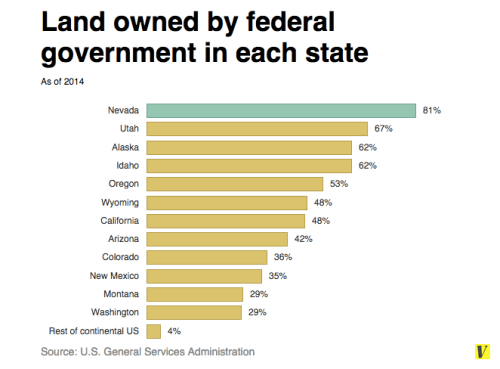 What did the Hammonds do?

The Hammonds were convicted of arson in 2012.

According to reason, the ranchers set fire to their property to deal with an overgrowth of invasive juniper trees and sagebrush and make room for grasses for cattle feed according to OregonLive.

Oregon ranchers claim that the Bureau of Land Management has refused to conduct the mandatory environmental studies to deal with invasive weeds and juniper that ruin grazing land. To protect their livestock, it appears the Hammonds decided to act. The fire got out of hand, spread to adjacent federal lands, and required the government to spend $600,000 fighting the blazes.

Why are they going back to prison?

The Department of Justice (DOJ) decided to re-sentence them on antiterrorism charges, arguing that the Antiterrorism and Effective Death Penalty Act of 1996 required the Hammonds serve mandatory minimum sentences of 5 years. The feds won, and last year, a second federal judge ordered the Hammonds to return to prison on January 4, 2016.

“The verdict sends an important message to those who think that they are above the law,” said U.S. Attorney Amanda Marshall.

Let’s not let who is involved distract us from what’s happening.

Some of the activists occupying Malheur National Wildlife Refuge are racists. They are armed. I’m not saying armed racists should give anyone warm fuzzies.

But remember how every time a black boy is shot in the back his mugshots go up on national news? Some teacher is always called upon to talk about what a “thug” the deceased was. The victim is described as “no angel,” as if only angels deserve to be arrested alive.

Now the media is doing the same to these occupiers. CBS News is calling them terrorists.

We can admit that if they were unarmed, urban black folks the National Guard would already be there.

But that doesn’t mean their cause is unjust. Non-angels deserve freedom and property rights. They deserve not to be imprisoned twice on trumped-up charges.

Left-wing Twitter, of course, didn’t label this protest, say, #OccupyMalheur, but #OregonUnderAttack, which implies, incorrectly, that the protesters at Malheur were being violent against the residents of Oregon. There have been no reports of any casualties, clashes, hostages, or deaths. There appears to have been nobody at the outpost the protesters occupied. Bundy told the media he and the protesters plan on occupying the outpost “for years,” and called on like-minded activists, or “patriots,” to join them, but it’s unclear that the protesters have the resources to accomplish a sustained occupation. The local sheriff said multiple agencies are “currently working on a solution.”

You can expect endless “think pieces” and “hot takes” around the idea that the government should crack down on the armed protesters with extreme prejudice—either in the service of equality of police violence or out of a disdain for activists who exercise their Second Amendment rights, as well as calls to identify the protesters as “terrorists” for having the audacity to use guns in their demonstration. (Semi-related: as a student at Columbia, Eric Holder participated in an “armed” takeover of an ROTC office.)

Such arguments, as always, only serve to provide legitimacy for future acts of government violence. Self-proclaimed people of conscience interested in reducing and even eliminating excessive state violence should not make exceptions just because government violence might satiate their sectarian desires or partisan agendas, because those exceptions easily become the rule by being exploited by other sectarians and partisans.

I think we should call out double standards. On both sides. Occupation isn’t violence. It’s speech. It wasn’t violent when it was Wall Street and it isn’t violent now.

But most of all, we can’t stand by afraid and let fear lead to violence. The Federal Government must stand down and work with the protesters. We have to avoid another Ruby Ridge.