I listened to Meryl Streep’s Golden Globes acceptance speech this morning and cringed. I agree with Lindsey Gudritz that Meryl Streep absolutely had her facts straight. “The President-Elect did mock a disabled reporter,” Gudritz wrote. “Ruth Negga is from Ethiopia and Viola Davis was born in a sharecropper’s cabin. Tommy Lee Jones has made it his career to privilege-check Hollywood, generally.” 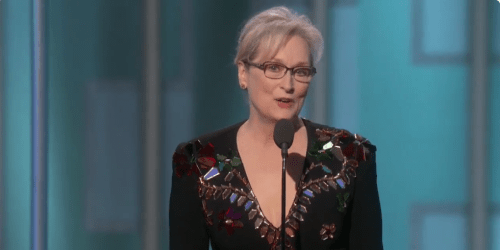 I would not call the speech “brilliant,” however, as Lindsey does.

The thing that made me cringe about the speech wasn’t the content. It was the context. Meryl Streep stood up there with a shaky voice and pointed out that Donald Trump is a mean, moronic person. Well, damn, Meryl. Thank you for enlightening us.

Now, if Meryl Streep HAD called out Obama’s failings, that would have been interesting. But she didn’t, to my knowledge. Certainly not during any of her acceptance speeches. Somehow the targeted killing of an American citizen without trial, and his son, who wasn’t even accused on any crime, hasn’t hurt Streep’s feelings.

Here’s the thing. We’re all like this. We all get more upset by the wrongs done by the other team. Have I shared the video of the kids beating up the disabled boy while yelling “Fuck Trump?” No, because I don’t want to play into the whole narrative that somehow these kids represent “Black Lives Matter.” But at the same time, I’m ignoring the wrongs done that fit less neatly into my narrative. We all do this. We’re all guilty of this. The difference is that when celebrities do it they seem to lack any kind of self-awareness about it. Which is grating as all hell. Your celebrity doesn’t make you an impartial observer, ma’am.