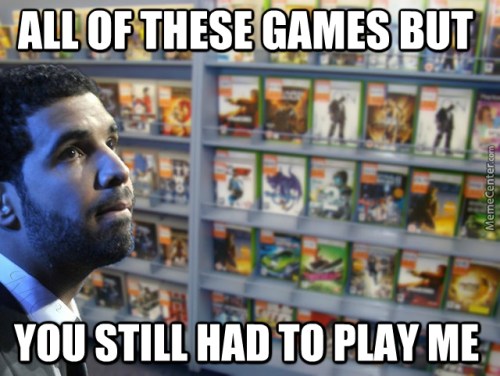 There’s a new development in the infamous Drake v Meek Mill feud of 2015.

Screenshot from a GQ interview of Mill and girlfriend Nicki Minaj, and commentary, from Julie Ann Horvath:

“When you realize that so much of Drake’s music about supporting women and them living off of him, then Meek is like”

For those unfamiliar with Drake’s beef with Meek Mill, it began on Twitter, when Mill accused Drake of using a ghostwriter for his raps. This is frowned upon in the hip hop community. Drake denied the claim, then released several diss tracks which achieved some notoriety. In one of them, “Back to Back Freestyle” Drake mocks Meek for being less successful than his girlfriend Nicki Minaj.

You love her then you gotta give the world to her
Is that a world tour or your girl’s tour?
I know that you gotta be a thug for her
This ain’t what she meant when she told you to open up more

Meek is the opening act for Minaj’s Pinkprint Tour.

Meek Mill has released one, poorly received, diss track in response, and has been otherwise generally quiet on the issue.

What’s interesting about Mill’s response is that IT’S AWESOME.

What had happened was, Drake tried to make Mill feel bad for not hewing to one traditional standard of masculinity, the one that mandates that men are always more financially successful than their female partners.

But in some ways this is more of a marker of white masculinity than black. American black masculinity differs from white in many ways, including the breadwinning expectation. It’s not that black men aren’t expected to provide for women financially. There are countless rap songs about all the things that black men are going to buy for the women they’re fucking. But the nature of the transaction is shorter term. Men aren’t signing up in these songs to marry these women and pay the mortgage on their shared house. They’re promising champagne, jewelry, trips, and cars.

Perhaps, as a feminine Canadian black man, it’s not surprising that Drake would misunderstand American black masculinity. Described by Vox as “America’s sweetheart,” before he was Drake, Aubrey Drake Graham got his start in Degrassi, a Canadian soap opera. He’s the subject of a set of memes playing off how sensitive he appears to be.

Ironically, it’s Meek Mill, with his superstar girlfriend, who best represents the present and future of American black masculinity.

Way back in 1997 the Journal of Blacks in Higher Education reported that black women were earning more degrees than black men. The trend has only increased. In 2010, 66% of black people who finished a Bachelor’s Degree were female, as were 71% with a Master’s, and 65% with a Doctorate.

According to a 2014 report from the Black Women’s Roundtable, “Though all women lead their male counterparts in college enrollment and degree attainment, black women do so at higher rates than any other group of women in America.” Black men are kept out of school and work by, among other things, police profiling, disproportionate sentencing, and disproportionate discipline in schools.

With or without degrees, black women kick ass. Labor force participation rate? Higher than all other women, even after they become mothers. Entrepreneurship? They start businesses at six times the national average. They represent the fastest growing segment of women-owned businesses. In 2014, black women own more than 1 million firms, employed 272,000 people other than themselves, and generated an estimated $44.9 billion in revenue.

And yet, racism is still alive and well for black women too. Black women endure a higher wage gap than white women. For every dollar a man earns, a woman earns 77 cents. Unless she’s black, in which case she earns 64 cents. Median wealth for a single black woman in 2010: $100. Single white woman? $41,500. Almost half of black women had zero or negative wealth. Those businesses they start? They get less funding and make less money.

Regardless, black women have long out-earned their male counterparts.

What that means is that black women can’t participate in assortative mating, or marrying someone with similar levels of income and education. These marriages of equals have become the norm.

What started in the black community has now begun to affect low-income, low-education whites.

While marriage rates among those without a college degree fell sharpest for blacks, they are now falling for whites as well.

Economic realities mean that a black masculinity that requires breadwinning is one that is increasingly out of reach. In its stead is rising a new black masculinity, epitomized by Meek Mill. Read how Nicki Minaj describes him in the GQ interview:

People tell me all the time, it takes a special kind of man to be with a woman who has her own, and it takes a special kind of man to not feel insecure by a woman who is doing her own thing. You know? So, one of the things that made me want to be with him is we spent so much time talking, and he always made me feel like he was ok with me being me. As an artist and just as a woman. Obviously I’m a strong woman in a lot of ways… I’m not a strong woman in every way. I don’t want to make it seem like I am some superhero because I’m not, but I do know that it takes a certain kind of guy. And time will tell if Meek is that kind of guy, because it’s definitely not easy.

It takes a special kind of man to be with a woman who has her own. A manly man. A man who is secure enough in his masculinity that it doesn’t rest on a degree or paycheck. That it rests on being genuinely happy for, and not envious of, a successful woman. A man for whom her successes are his. A man who’s too man for zero-sum thinking.

Meek Mill is feminist af. He’s redefining black masculinity into something that is not standing in opposition to feminism, but helping to fulfill its promises. The new black masculinity is about supporting black women who hustle. It’s about doing the books for her startup. It’s keeping up the household up so she can work late. It’s about taking the kids to soccer and the doctor so she can get a promotion.

Racism made this the only masculinity available to many, if not most, black men. Income inequality, assortative mating, and the shift from an economy that offers workers in agriculture and manufacturing a middle-class existence to one that only offers that to information and service workers is shifting that reality upwards, to whites.

This is the new economy.

Women will continue to earn more degrees and more money than men. It has already started at the bottom, and will rise up through the top. So the correct response is to embrace it. Men can fight it. But without degrees and income, they will lose.

Smart men, good men, men who will find love and success, will do so by embracing the new masculinity.