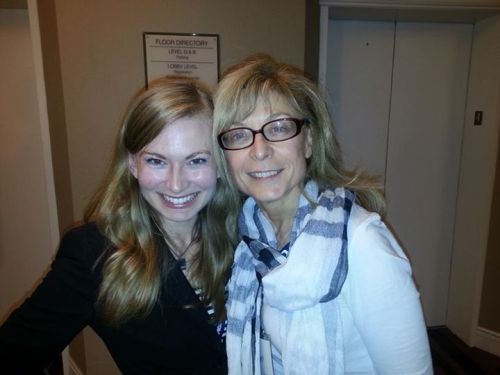 Me and Nina Hartley at the Woodhull Sexual Freedom Summit

What does it mean when one of the people you have sex with, apropos of nothing, suggests you write about your battle with sex addiction?

Okay, yes, I have a sex blog. I’ve definitely exceeded the average number of sexual partners. Going a week without a fix is an anomaly.

Addiction, properly defined, probably exists. And with it, denial.

I like to get fucked and fucked up. And, yes, that likely colors my view.

So between my self-serving need to justify my behavior and my liberal white guilt need to end the drug war, I’ve looked further into the science of addiction than your average girl. I’m also a huge nerd.

After poking around, I’ve come to the conclusion that it’s likely that a lot of what we think we know about addiction is mostly superstition.

Starting with how we define addiction.

One definition of addiction posits that someone is addicted to something when they lose control over their choices in pursuit of it. The National Institute on Drug Abuse, aka the scientific arm of the drug war, claims drugs cause “brain changes” that “challenge an addicted person’s self-control and hamper his or her ability to resist intense impulses to take drugs.”

Meh. Recent experiments don’t support the view that addicts have less self-control or are less rational than non-addicts.  This view of addicts as sub-human also has disturbing unintended consequences. And let’s not forget that the case for free will period is pretty weak.

Okay so what is addiction? It’s probably more when people do something even though it interferes with their life. The dad who gets fired for his drinking. The daughter who steals from her mom for money for meth.

But then, taken literally, everything I do “interferes with my life.” Where, exactly, is the line between “interference” and “my life?” If my life is having group sex while I shoot heroin it cannot really be said that drugs and sex are interfering with my life.

And here’s where it gets really interesting.

There’s a famous study used to illustrate the point that addicts can’t control themselves. It showed that drug-addicted rats would push a button for drugs until they literally starved themselves to death.

But Dr. Hart, who studies addiction at Columbia University, found that though all the rats were given unlimited cocaine (where do I sign up for that study?), only some of the rats became addicted. Only the rats who were raised in solitary conditions and given no other options got hooked. Give the rats access to sweets and let them play with other rats, and they stop pressing the lever.

People judged the rats as making a stupid choice. In actuality, from what I know about solitary confinement,  the rats were making a perfectly rational choice. I’d wager that it’s basically a coin toss between a coke binge til death and a lifetime of torture.

Non-addicts judge addicts as making irrational choices because they literally can’t imagine the horror of the options addicts see available to them.

Anyway, we’ve come pretty far afield of the central question. Am I a sex addict? I mean, no. I, like the rats, just don’t have a better option. I’d actually love nothing more than to stop whoring around and settle down with one person. It’s a fucking slog, dating. And the sex is definitely lower quality. But I don’t know how to get from here to there. Who knows, maybe it’s right around the corner. I should text that guy who asked me to write this.

[Editor’s note: My BFF has submitted that “not knowing how” to get settled down is in fact a cop-out and that in fact I remain single because I’ve rationally calculated the work cost of whoring around to be less than meeting someone else’s emotional needs. This seems plausible, but I maintain that my continued whoring around as opposed to settling down results from my standards exceeding my market value.]