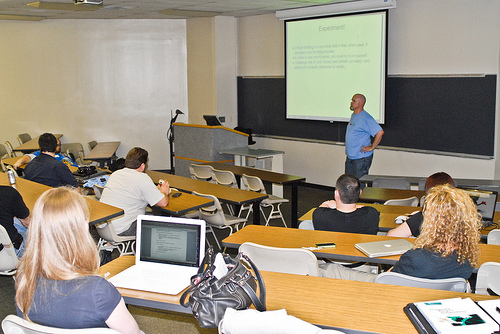 This is the best shot of me. They're all of my back.

Birmingham’s BarCamp was this weekend. I think it was Birmingham’s fifth. I’d never been and didn’t plan to present but then bam, I’m presenting first round to a whopping ten people. Nervous! Of course I did Basics of SEO. The group was awesome, asking questions, answering mine. Here’s a list of BarCamp Birmingham 2011 sessions and speakers.

My favorite session was, ironically, What is Awesome. Ironic because I meant to go to How to Grow the Digital Community. Also ironic because I went to the event for tech talks but enjoyed a non-tech talk the most. What made What is Awesome so, well, awesome, was the discussion. Really, smart, funny, cool group of people in there. Questions included, can you be awesome and an a**hole at the same time? Conclusion? Yes. Example: Barney Stinson. How is being awesome at your job search like being awesome at dating? Conclusion? Look for ways to help the other party. Don’t be desperate/use the shotgun approach. Bring something to the table. Example? Life, man.

I was also really challenged by the Critical Thinking talk. Again, a non-tech talk.

I had a great time, learned a lot, met some really cool people, and ate delicious BBQ from Jim & Nick’s. All in all a great day and I’d highly recommend you head out to next year’s.

Photo by Josh Self.