SECOND FRIDAY IN A ROW WITHOUT FORGETTING! Ahem. Welcome back to another edition of Sex, Tech, and Pop Culture.

One Weird Trick for Keeping Female Employees From Quitting via @lainnafader

2. PAY WOMEN MORE. Don’t assume we want to become mothers. And if we already are mothers, don’t assume that we’d rather have fewer hours or responsibilities. Assume, in all cases, that we work hard and we want money. More money. As long as we keep showing up and doing the job well, and until we tell you that we need different hours or a new role, just pay us more. And keep paying us.

YASSSS. As a child-free person, as a person who doesn’t necessarily want to subsidize your choice to be a parent, as someone who doesn’t want people to assume I’d rather have fewer hours or responsibilities, yasss. This is what irks me about the position many feminists take that flexible work is a path toward female empowerment. As long as men and women are working differently, we’re going to be paid and treated differently. If parents want flexible schedules then that’s fine, but it’s neither here nor there for feminism. Feminism means you work and get paid according to your contribution, not your gender.

This is interesting. Via Cynthia Bell, aka my bestie for my questies. Not sure how I feel about it. On the one hand I don’t like black-and-white thinking about nuanced topics like cultural appropriation. On the other hand, agency. MMMM.

“In other words, Olivia Wilde has agency, and made her own adult decisions about the nature of Sudeikis’s pickup line, and she is the sole and inviolate authority on her own life. Like, for example, her decision to marry him. Ultimately, so much of contemporary progressive politics involves trampling on this authority, on sticking our own subjective ideas into the lives of others. Like so many other elements of contemporary culture, the economy of offense is revealed to be just another expression of our own ego. We need to remember that we are not the cosmos, that the world is full of other people making their own adult decisions. To forget that isn’t progressive. It’s, well, a kind of imperialism.”

Stand To Work If You Like, But Don’t Brag About The Benefits, via Andrew Marder. Who sits all day at work next to me. 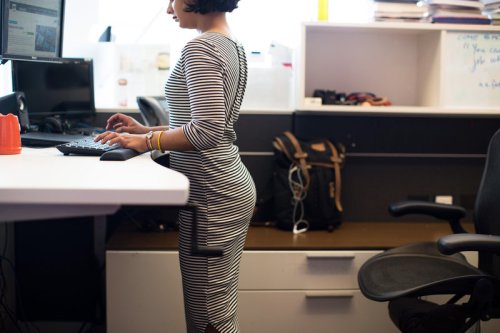 I stand all day at work. I do it to stay awake, to burn calories, and to alleviate back pain. Turns out it might not be doing any of those things. Well the staying awake is probably true. HOWEVER. The woman in the pic has a great ass, for a white girl. And I also have a nice butt for someone as melanin-deficient as I am. Coincidence? I think not. Thanks, standing desk.

You know what’s weird to me? The idea that you can dislike something and still think it should be legal is supposed to undergird libertarianism. And yet the moment you start talking about disliking racism or misogyny, people assume you want to make it illegal. Why doesn’t it work both ways? Why doesn’t it work for all topics? Because libertarians r dumb, that’s why. And often racist and misogynistic. *throws bomb* *shruggies*.

Anyway, I feel like a blog called Sex and the State should address ENB’s Good and Bad in New State Sexual-Assault Bills. Here’s the thing tho. I’m against rape. But I’m not sure rapists should be imprisoned. I KNOWWWW. Burn the witch. This is a complicated topic and I’m not going to do it justice. But hear me out for two seconds. First off, I’m a prison abolitionist. People should be protected physically from people who are a credible threat to their physical safety. But I’m not sure prison is the best way to do that. I do NOT support using prison as a method of punishment or deterrence. I think it’s inhumane and ineffective.

Second, the difference between rape and not rape is a difference of opinion. Most crimes either happened or didn’t happen. With rape, the question isn’t whether it happened, it’s whether the person knew the other person didn’t want it to happen and made it happen anyway. To establish whether someone was raped requires reading the other person’s mind. Even if you can prove person A made it clear to another reasonable person they didn’t want what person B to do what the did, you can’t prove person B actually understood it. I’m just not sure about throwing people in prison based on what you think they knew. Yes, many rapists know they’re raping. I don’t want people who rape free to rape. But I don’t think that’s true of most rapists. I think most are genuinely confused. Maybe I’m naive. But I’ve had enough sex to know that even under the best of circumstances communication isn’t clear and mind reading is hard.

I 100% support a cultural standard of enthusiastic, affirmative consent. I want everyone to interpret “maybe,” silence, slurred words, and other unclear noises as “no.” I don’t GAF about whether or not people think that’s unsexy or unrealistic or SJW or feminazi or whatever.

But legislating that standard is rife with unintended consequences. So, yeah. That’s my opinion on the new state sexual assault bills. The unsubscribe button is right below.

However, before you go, please consider that I genuinely like it when people disagree with me. I’m never surprised. Well, not often. Like, I know my opinions are outside mainstream thought. Some of that is intentional. Some of it is just me being a weirdo. Last night I was hanging with the incomparably brilliant Trevor, the hilariously animated Feeney, and the uber-sexy Sam (who is both brilliant and hilarious as well, far be it from me to sexualize him). Trevor quoted his dad, who said something along the lines of, “I’m always surprised that people disagree with me.”

I’m the opposite. So come at me.