Hello my babies. Happy Monday. I hope your weekend was fantastic. Mine was. Warren bought me a beer and then kicked my ass in Scrabble on Sunday afternoon. Saturday I bounced in a bouncy castle like a goshdarn 5-year-old and it was amazing.

I highly encourage you to read this entire 1971 New York Times op-ed on housing, via @sfyimby:

The exclusionary laws are not completely explicit: there are no zoning maps divided into racially or economically restricted areas, so labeled. But there are Thousands of zoning maps which say, in effect: “Upper Income Here”; “Middle ? to ? Upper Income Here”; “No Lower?Income Permitted Except as Household Employees”; “No Blacks Permitted.” The practical effect of the maps and codes is to prohibit all but the most costly forms of housing development.

Why do we call the result de jure segregation? Because the racial consequences have been understood for a decade or more by anyone familiar with patterns of population movement. It is a certainty that the planners and public officials who draft and enact zoning ordinances restricting land development to single family, detached structures on plots of an acre or more do so in full awareness that, as a consequence, almost all blacks will be excluded from such zones.

If you replace “suburbs” with “cities” nothing has fucking changed! White people are still white peopleing y’all! Speaking of racism in housing, @MarketUrbanism shared this gem: “21 percent of emails received by the provincial government on the subject of real estate were overtly racist.” Please keep in mind that “foreign buyers” is dog whistle for “Chinese people.”

People in British Columbia are real worried. “I am appalled at how the Chinese are literally taking over Vancouver, and in such sneaky, dirty, underhanded ways,” one wrote. Another’s letter contained this (emphasis mine): “I heard that an Oriental man sat in his car, didn’t even look at the inside of some building at Salish Court in Burnaby, and purchased them. I am definitely not a racist. However, I feel very strongly that we need to make Canadians a top priority.”

In response to voter concerns, in August 2016 Vancouver implemented a 15% levy on home purchases from abroad. Afterward, foreign buyers dropped by 80%. Housing prices leveled off somewhat in Vancouver, but increased in neighboring Victoria. Highly skilled immigrants leveled off too. The city plans to amend the tax to exclude foreigners on skilled-work visas.

All this to stop the 5.1 percent of homes foreigners bought before the tax was announced. 😐

In case you’re worried about the Chinese taking over San Francisco, according to the National Association of Realtors, there are more homes vacant in San Francisco right now than Chinese investors bought in the entire country between March 2015 and March 2016. If you’re still worried, as a reminder, the best way to discourage Chinese investment is to build so many new homes that homes stop being investment vehicles and start being homes again.

Next up,  @marketurbanism had a good zoning is bad thread, which I’ll copy and paste for ya:

When these were mapped in 1904, they all had storefronts. 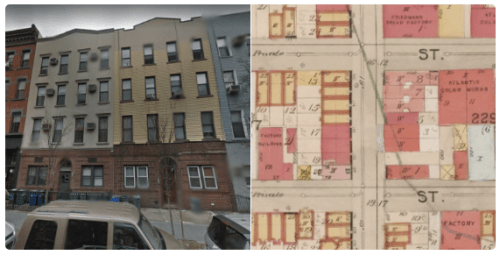 That’s what black bars mean on the west side of the street In 1961, the area was mapped M1-2 – existing housing could stay, but only retail, office space and industrial space could be added anew. At some point, the storefronts were converted to apartments, and the area was rezoned from non-residential-only to residential-only. Today, the owner wants to convert the ground floor back to retail, but now has to pay land use consultants a ton of money to get a rezoning, and the neighbors can complain that they don’t want it. All to convert a building on a mixed-use block back to its original use. In sum, zoning sucks and is ahistorical and should be abolished. The owner will go through the trouble because retail on Bedford Ave. is very valuable. But this same story plays out all around the city in places where owners aren’t going to go through the trouble. How many small businesses and jobs were never created because of that?

New Bay City Beacon column out tomorrow! See ya then!