Happy Monday! I got a lot of new subscribers last week. If you’re new here, welcome.

Sometimes I write new things but most times I link to things other people wrote.

If you’re here for my stuff, my latest thing was a two-part series for FEE. Part one is Now Might Be a Great Time to Work on Reining in the Executive and part two is How to Finally Restrain the Presidency.

I like Laurie Penny a lot. But I also disagree with her a lot. She just tweeted: “Feminism without socialism has internal logic, but limited usefulness. Socialism without feminism makes no sense whatsoever.” I am not in agreement here. In fact, this is a lot of why no one takes feminism seriously. A central authority taking capital with violence and redistributing it will never lead to more power for women.

And while I’m shittin on your whole life, @joe_atikian tweeted “You can see the severity of biological harm caused by technologies. Lifespan takes a hit, right?” 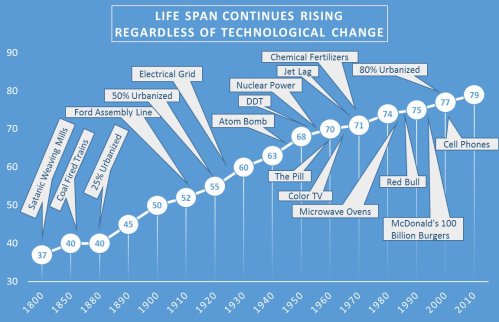 During the Republican primaries in 2016, Donald Trump was more popular in McDowell County than anywhere else in America. Trump won 91.5% of Republican primary voters. It was once the coal capitol of America. Then in the 60’s and 70’s, automation, plus falling energy prices dealt it a blow. Fracking killed it. Now it’s the poorest county in West Virginia. Life expectancy for men in McDowell County is lower today than it was in 1980, and is now equal to that of men in Ethiopia. Paul Lewis and Tom Silverstone asked out-of-work coal miners why they supported Donald Trump. The answer was simple. While Hillary Clinton literally promised that there would be “a lot of coal miners out of work” as a result of her anti-coal policies, Donald Trump promised to reopen the coal mines and get miners back to work.

Y’all know I am 110% on board with technology. I’m not down for head-in-the-sand, these-people-don’t-matter boosterism.

#NameAPenceMusical bothers me. Trump got his knickers in a twist. Pence literally told his kids, “That’s what freedom sounds like.”

Speaking of, you should read 10 Things Libertarians Need to Know About Trump and Pence, Hamilton, and Political Correctness.